A matter of life and death

On my last fishing trip, the sea reminded me once again of its colossal power and hidden dangers. Not for the first time I had to consider the possibility of attempting to swim to shore.

Although I was at the helm, I allowed my decision to move to calmer waters to be overruled by the two local fishermen in our party of four, and it won't happen again! 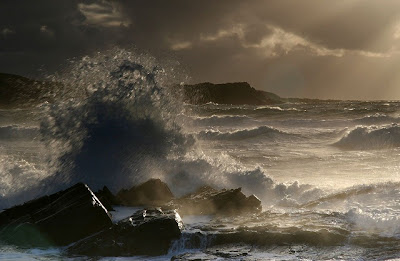 We reached the area of interest as the sea was picking up and the wind increasing. I didn't like the idea of setting anchor in rough seas but the pros assured me it was OK to do so. Half hour later I noticed an increase in the wind, and, turning to survey the sea to the west, realised the white-capped monster waves were racing towards us and would reach us in minutes.

I asked the others to pull up anchor but it soon became apparent they couldn't. It was stuck firm, wedged in the reef below us. I asked Jorge to take over the helm and steer the boat slowly around the rope and against the tide and the three of us would try to pry the anchor from the opposite direction.

Three pairs of hands took to pulling the half-inch nylon rope, taking care to avoid the propeller area and the boat proceeded to turn. As it did, the huge waves hit us side on, shoving the Bayliner 10 metres against the anchor pull. Catching us unawares and unable to slacken our grip in time, the rope whizzed out of our hands, taking the skin of my left knuckles with it.  The three of us struggled to keep our balance as the boat tilted sideways at a 45 degree angle, threatening to roll over. We just managed to stay aboard, release the anchor and sail to the nearest port.

Some years back, my father brother and I booked a fishing trip off the coast of Devon, England, and the experience left us contemplating giving up boat fishing altogether.

We arrived at Lee Bay to board and were told the skipper was off sick and that his teenage son would take us out instead. Not a promising start. 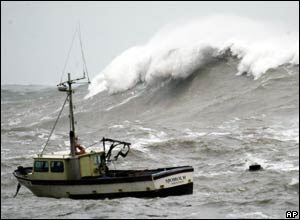 An hour into sailing and conditions changed - a storm hit the area. The young skipper decided to go back to Lee Bay and calmer waters, where we would fish until conditions improved. We sailed towards Mort Point, where a monster buoy served as a warning for the rocks just beneath the surface. The skipper underestimated the tide and wind force, and sailed too close to the buoy.

The huge kelp-covered buoy of about 20 meters in diameter and with nuts the size of car wheels around the waist must have weighed untold tons. Nevertheless, it was bobbing up and down on the waves like a beach ball in the surf. At times it was pushed so high on the waves it exposed the tree-trunk thick chain underneath that tethered it to the sea bed. As we got nearer, the skipper was frantically doing all he could to change course, but to no avail. We reached the buoy as it was riding high, above the boat by at least 5 meters and on its way down.  It hit the side of the trawler and cracked the hull. We thought we were done for, with no chance of swimming to shore under the conditions but miraculously the trawler righted itself and managed to sail to port, despite the water ingress.

On that occasion, the giant marker buoy of Mort Point nearly lived up to its name.

Sea fishing is dangerous but so is crossing the road.