Islam Is Not To Blame. Raif Is A Muslim

Almost all terrorist atrocities of late are committed by Muslims.  Often under the well-rehearsed cry of Allahu Akbar.

With every attack, support for Israel increases - an inflammatory consequence which adds fuel to the fires of an already volatile situation.

Islamophobia in the West continues to flourish with every evil deed, giving the terrorists exactly what they want. The more alienated and disenfranchised Muslims feel in the West the easier they are to recruit. A perpetual supply of jihadis for all planned future campaigns agains the West, The East, and even more surprisingly, the Middle East is the ultimate aim of the extremists.

Let's not make the mistake of helping terrorism.

Islam has been hijacked by the jihadis and is being used as a tool to legitimise murder, intolerance, racism, slavery and most dangerously, a political ideology drenched in the blood of all those who dare oppose it. Most victims are also Muslims.

And it all started in Saudi Arabia.

Just over a hundred years ago, back in 1902, the Wahhabi Clan of present day royals of Saudi Arabia launched a ferocious attack against the neighbouring 3 tribal regions of what is now Saudi Arabia. Murder, rape and slavery won the day back then, and all the atrocities were committed in the name of Allah and Sharia Law. But of course, religion was not the reason for the greed and lust for power of the Saud Clan.

Those actions of a century ago are almost entirely responsible for spawning all of the present day jihadi ideology. Conquer at all costs and destroy all who stand in the way.

The House of Saud should not be considered a friend and ally of the West, for it is a corrupt dictatorship ruling over an oppressed and unjust society.

The House of Saud finances the building of mosques in western countries, yet refuses to allow the construction of churches in Saudi Arabia for the very few Christians who live there.

Osama Bin Laden was a Saudi.

And the House of Saud continues to promote religious intolerance and to stifle all dissent.

Voices such as that of writer and campaigner for freedom of expression and women's rights, Saudi citizen, Raif Badawi. 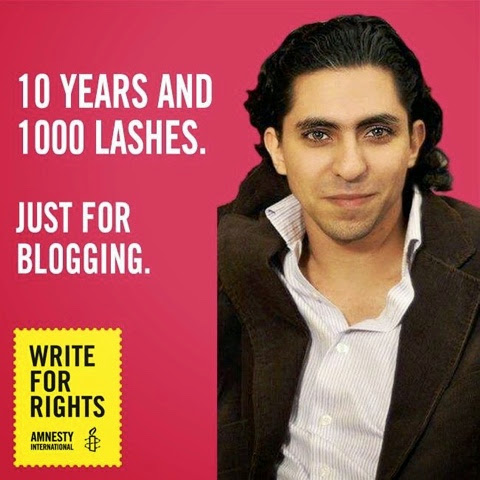 Raif was condemned to 10 years in prison and 1000 lashes, to be administered every Friday, 50 at a time, for 20 consecutive weeks.

The first session took place yesterday, in public, and was filmed secretly by a few who risked their own life and liberty in order to tell the world.

I watched the clandestine video and it turned out to be as I had half expected; a quiet, sedate public flogging of lightly administered lashes unlikely to have caused any damage to Raif. The Saudi authorities knew the world would be watching, thanks to a campaign by Amnesty International through social media. Had that not been the case one can assume the flogging would have been a lot more damaging.

Raif wrote in his blog nothing more than light criticism for the way Saudi Arabia is governed. That's all.

Islam is guilty of many injustices, as are all other religions, but it can't be used as a cause to further alienate and persecute Muslims who have chosen to live in Western countries.

Those of you who know me know I never defend religion, in fact the opposite is true, but I always defend justice.

After all, did we blame all Irish for the actions of the IRA some decades ago?

No, we didn't. Well I certainly didn't. It would have been unfair. Just as it is unfair to blame

/or the vast majority of Muslims who have nothing to do with the atrocities committed in the guise of holy war.

The present day extremists are driven by greed and delusion, just as Ibn Saud was back in 1902.

Raif is a Muslim. A Muslim I want to help. A Muslim I'd have as a friend.

Just like the Muslim French policeman executed outside the Charlie Hebdo headquarters whilst on duty, by murderous men who claim to be Muslims.