Sex and Drugs and Bacon Rolls

Went on a drive into central London earlier today with the intention of paying a visit to The Breakfast Club in Soho. It's supposed to serve great breakfasts and that's exactly what I needed after a late night at an engagement party.

My head was fuzzy my stomach empty and the queue outside the Club a mile long. To make matters worse it started to rain as we approached. After a few expletives directed at no one in particular,we made a hasty  retreat into O'Neill's Pub in Carnaby Street. The 'hair of the dog' went down a treat, washing away the previous night's excesses and the bbq burger and chips. 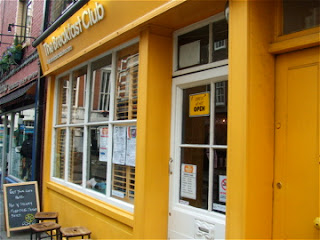 never got to taste the food...﻿this time 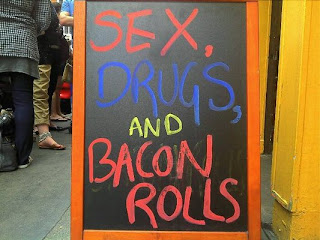 no wonder the queues are long! 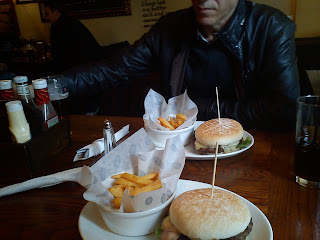 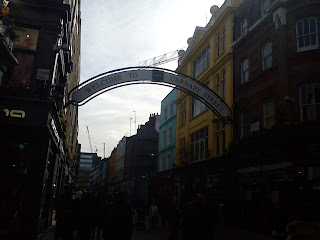 gloomy in the rain - the view from O'Neill's
There is a kind of serene melancholy when the rain falls in London.  I never quite know what to make of it, but I know I like it. It is so familiar; the greyness, the smell, the atmosphere. It feels like the great city is weeping, quietly, without a fuss, as if wanting to go unnoticed. Part of me wants the rain to keep falling, as a reminder that life has its ups and downs, its good and bad times. London weeps with me, albeit for different reasons... I just wanted breakfast, that's all!

Email ThisBlogThis!Share to TwitterShare to FacebookShare to Pinterest
Labels: London

Spring -so much  more than just a  transitional period between winter and summer!
﻿
It is the season of rebirth, renewal and regrowth. And most importantly, the season when my entire being wakes up from its enforced winter slumber and starts to look forward to longer days ahead. 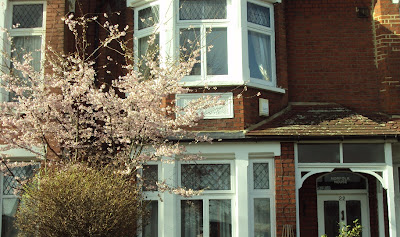 Cherry Blossom in Chiswick﻿ this morning
Evenings enjoying  a drink in some pub garden; a barbecue; a stroll along the banks of the Thames; a drive through Richmond Park...

Richmond Park's deer residents - Beware! The
annual cull is about to commence! 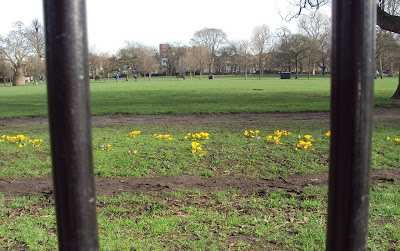 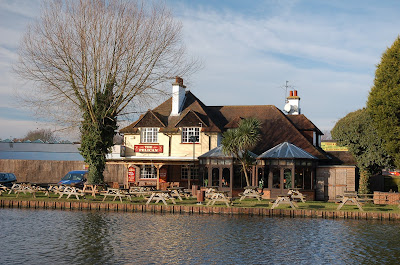 The glorious Pelican with its ideal beer garden
...and onto a brighter subject.
I have neglected this blog of late. Guilty as charged. Busy with a house move and demanding job and a case of the dreaded 'writers-block'.
While scratching my head for blog ideas, I saw the pathetic performance by Colonel Gaddafi on TV and immediately thought of my 'Turd Of The Week' awards. 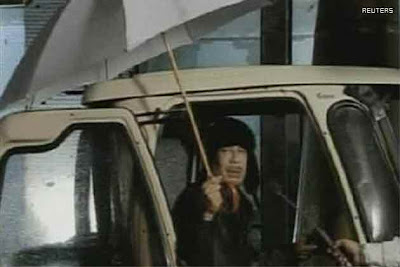 The "blabbering old fool" TV performance﻿.
Under My Umbrella...ella...ella
﻿
﻿The Arab world is in turmoil and on the brink of self-destruction. From North Africa to the Arabian Peninsula the populations are rebelling against the tyranny and corruption of oppressive dictatorships, lack of democracy and human rights.  Nothing new then, I hear you say. Not so. This time it's for real. The mass protests are sweeping aside governments and gathering momentum day by day. The genie is definitely out of the bottle and about bloody time, I say.

'Mad Dog' Gaddafi  has unleashed armies of paid-up foreign mercenaries against his own people in a desperate bid to remain in power. He is determined to go down fighting and, unfortunately, as a leader with the bulk of the army on his side, the outcome will be bloody, that's for sure.  Hundreds of protesters have already been killed in what could become the bloodiest revolution in recent history. 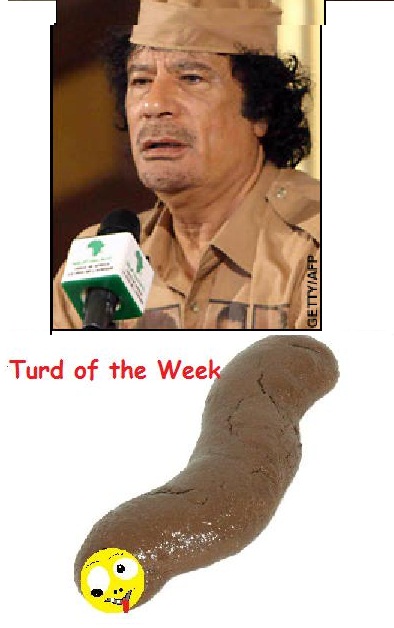 awarded for the pathetic 'umbrella' performance
and ensuing genocide
Soon, summer will arrive, and with it the wonderful aromas of ice-cream, sun lotion﻿ and cold beer. What a heavenly combination!  And hopefully by then Gaddafi (the nasty shit) will be long forgotten, buried somewhere in the desert sands of Lybia and maybe even erased from history.
So much to look forward to...I LOVE SUMMER!
:)
Posted by Joe Pereira at 11:55 No comments:

Email ThisBlogThis!Share to TwitterShare to FacebookShare to Pinterest
Labels: "Turd Of The Week", Gadaffi, Spring

I read the following article recently and just had to share it with you.


“I went to the party, Mum. I went to the party, and did as you told me. You asked me not to drink alcohol, so I drank sprites.
I felt proud of myself, I didn’t want to drink and drive, contrary to what some friends were telling me.
I chose not to drink, and your advice was correct.
And when the party ended, and people began to drive off ... I went to my car, sure that I would get home safely ... I never knew what awaited me, mum ...
Now I'm lying in the street and I can hear the policeman say: "The kid that caused this accident was drunk," and Mum, his voice sounds so distant ...
There’s blood all around me and I'm trying not to cry ...
I can hear the paramedics say, "We’re loosing her" ...
I am sure that the drunk guy didn’t mean to cause the accident, but he chose to drink and drive, and now I am dying ...
So why do people do it, Mum? ... Knowing that it ruins lives.
The pain is terrible, it feels like I’m being cut to pieces ...
Tell my sister not to be afraid, Mum, tell Dad to be brave ...
Someone should have told that boy that it is wrong to drink and drive ...
Maybe if his parents had, I wouldn’t be dying ...
It’s getting harder to breathe, Mum and I am really getting scared ...
These are my final moments and I feel so desperate ...
I wish you could hold me Mum, while I'm lying here dying, I wish I could say I love you, mum ...
So ... I love you and goodbye ... "

The above words, uttered by a dying girl, were written by a reporter who witnessed the car accident and took notes.

The reporter, shocked by the experience, started a national campaign against drink-driving immediately after, in 2004.
:(
Posted by Joe Pereira at 15:23 2 comments:

﻿
All settled in, new home is adequate and comfy and M is back from Sweden. Normality returns, life is structured and spring is on it's way. Life is good. 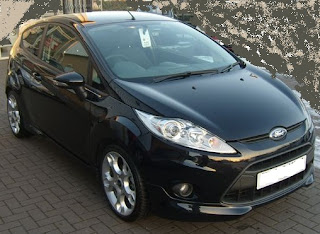 ﻿
We can plan ahead once again; trips, holidays, outings and even the next house move! I can't see us staying here for long, it's not our chosen area, but it'll do for now. Convenience rules! 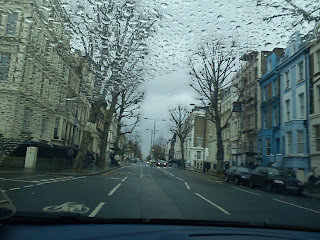 Being the area I went to school in, Ladbroke Grove (Portobello) always has a powerful impact whenever I return. It is more than simple nostalgia.The streets are so familiar even though all the shops have long since changed and modernised. The people are the same, the market traders of Portobello Market never seem to get old and die, instead they continue to sell the very same items I bought from them decades ago. 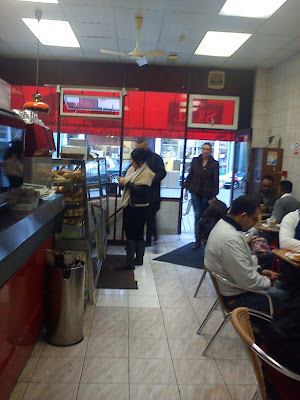 Cafe Lisboa
The winter drizzle kept the crowds away from Cafe Lisboa earlier today, as you can see from the pic. All the better for us, we were served instantly. 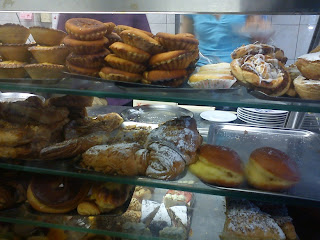 some of the Portuguese pastries freshly baked at
Cafe Lisboa 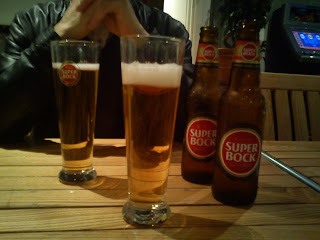 Super Bock lager, a taste of home at the
Sporting Club, W10
Then on to Sporting Lisbon Club for a beer, a Super Bock to be precise. If anyone knows of a better tasting lager than this Portuguese classic then please let me know. So good even Tesco sells it.
Upon entering the club I noticed Rui, the proprietor and old school pal of mine, sitting at the bar clutching a glass of wine. He looked the same as always﻿, if slightly greyer, sitting on the same bar stool, gazing over the same business he started some 30 years ago. The business that has enslaved him night after night and year after year. The business that has provided him a good return and enviable life-style and has also robbed him of his personal time.
We greeted each other with a hug and handshake. We hadn't see each other since Paulo's funeral. Come to think of it, since leaving school we have met no more than a handful of times. Somehow it doesn't seem to matter, we greet like we always did  in days gone by.
Nothing really changes...the greetings...the market...the beer...the weather...the area...nothing changes...nothing, apart from me.
:)
﻿
Posted by Joe Pereira at 15:15 1 comment:

Email ThisBlogThis!Share to TwitterShare to FacebookShare to Pinterest
Labels: nostalgia

Just a few words to explain my lack of posting.  I am in the process of moving home (yes...again) and am temporarily internetless.  Back in a couple of days, muah
Posted by Joe Pereira at 10:25 1 comment: