So Help Me God

I thought it best to start by answering those who may think I've lost my senses.


Is it just me, or does anyone else get annoyed when they hear someone say "God Help Me" ?

"If there were a god, would She/He/It  ( I'll use the acronym SHit for expediency)  help YOU with your trivial problem when SHit doesn't help the millions of children around the world dying of malnutrition, fatal diseases and war ?"

"Are you so special as to deserve the help that your god does not afford to the countless others who need it much more than you do?"

"Do you NOT think little girls being savaged by Female Genital Mutilation in parts of the Muslim World deserve more help than you?"

Or "Jewish babies having their foreskins removed for no other reason than cultural/religious dogma?"

Even "Christian baby girls having their ears pierced (maybe less painful than the examples above but still) for decorative reasons and motives rooted in early Christianity?"

If those believers who commit these vile acts on helpless children really believe humans are created in god's image then why do they feel the need to rectify the works of creation? Are you all saying your god made a mistake? If you are, surely that's blasphemy!

Now, if I were a believer, I'd feel guilty asking SHit for help with my trivial and less deserving problems.

I'd hate to think SHit may just grant my wish to solve the morning traffic chaos or abate the loud music from my neighbour's house instead of helping with the more urgent and serious cases.

How can anyone who believes in SHit believe SHit gives a shit?

To make matters worse, people in different parts of the world invoke different gods! Different gods depending on where they were born and indoctrinated. And most absurdly, they all think their god is the right one.

One thing is certain: They can't all be right.

But they can all be wrong. Of this I have no doubt.

Talking of doubts, Henry Charles Bukowski Jr once said, and I quote;

And to all those believers out there I say:

"With all the suffering pictured above, and many more tragedies constantly blighting our planet, what on earth are your gods doing about it?

If SHit is incapable of helping, why bother following, or worse still, invoking the help of such a useless shit?

Beauty is more than skin deep

Admiring beauty is a perplexing emotion. I think it is an emotion exclusive to humans - but I may be wrong.

In Nature we often see animals, especially birds, who appear to develop beautiful plumage to attract a mate, but do those creatures actually feel enthralled and mesmerised by beauty as we do?

Humans appear to have slightly varying tastes as far as admiring beauty is concerned, particularly when it comes to other people, but we also have a lot in common when it comes to Nature's works of art.

Take for instance the following photos:

I don't know about you lot, but all the images above evoke within me feelings of wonderment, awe, fascination, incredulity and astonishment.

The Science of Dreams

I've never been one to dream much. In fact I'd say I'm only aware of dreaming, or at least remember dreaming, once a month at most. 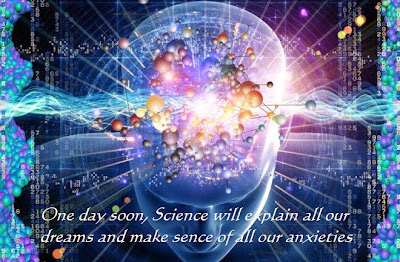 I do however, have a recurring dream/nightmare, that's not really a dream, but happens while I'm in a twilight state between sleep and wakefulness. A possible third state of awareness that has until now, never been written about or explained fully.(see link below)

I am asleep, then wake up but can't move. Paralysed, frozen to the bed, for what seems an eternity. As each second ticks by, anxiety grows, and I make some sort of inhuman, groaning sounds, as if pleading for anyone to rescue me by waking me up fully. I desperately want to escape this state of helplessness and paralysis.

This all started many years ago, can't exactly remember when, after reading some article about a small percentage of patients, who, while under the knife and anaesthetised, remember and feel the operation but are unable to communicate with the surgeons to stop the procedure. I was a very curious child, and often read articles and books, especially medical science articles, that were meant for much older audiences. The though of that scenario in an operating theatre ever happening to me, filled me with horror, and instilled a phobia-like dread of surgery. That, I believe, was what set off these unpleasant dreams that have haunted me ever since.

You can imagine how delighted I was to read this morning an article from BBC News depicting this condition, and that research is being carried out by Prof. Pandit of Oxford University Hospital.

Once again, science comes to the rescue and will, as it always has, provided me with answers to most of life's dilemmas.

How can so many people, mostly those of religious persuasion, be anti-science? The world is half-full of science-sceptics who wrongly blame science for many of society's woes.

You have all heard the illogical arguments of those science-haters who mention nuclear weapons as one of sciences worst inventions. Do those people refuse medical treatments such as radio therapy when cancer strikes? I don't think so. Yet radio-therapy, a treatment that saves countless lives daily,would not have come about without the nuclear research embarked upon for military reasons.

Science is neither good nor evil. Science has no ulterior motives or hidden agendas. Science is knowledge through research and experiment. Science is what sets humans apart from all other creatures on our planet.

To hate science is to hate knowledge.

To hate science for the weapons it has created is like hating water for causing death by drowning of so many people. Or hating fire for the same reason. Or hating the sun for the skin cancer it can cause.

It is illogical and pathetic to hate or even to be suspicious of science.

Science has given us all the mod-cons we have today that enhance our quality of life.

Science has given us medical treatments that have extended our lifespan by 50% in the last 200 years.

Science will, eventually, prove the non existence of gods and ghosts and all other silly superstitious nonsense that shackle so many people to blissful ignorance.

Science is the residence of all human knowledge.